Rick Reilly is an astute theologian 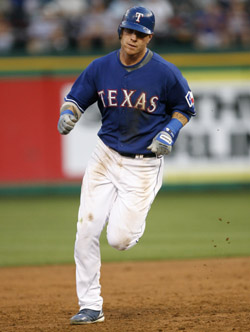 Last night I watched in awe as Josh Hamilton — a recovering heroin and cocaine addict — slugged a record 28 home runs in the first round of the MLB All-Star Game Homerun Derby. I love this guy more and more every time I see him play.

Hamilton says he was saved from his addiction by committing his life to Christianity. I say whatever keeps you out of the morgue works for the rest of us — and who am I to judge someone else’s religious choices?

I’m certainly not Rick Reilly, the maudlin hack that ESPN is apparently paying $2 million a year for watered-down Borscht-belt jokes, who diagnosed Hamilton’s performance — live on the air — with his signature mix of whip-smart humor and self-awareness:

“It’s a lousy night to be an atheist,” he said.

So take heed, atheists — multi-millionaire drug addict athletes are airtight proof that God hates you with a fucking passion. Sunday school is now closed. Be sure to leave a tip in the offertory.