I could have tried to be clever and called this post “Listomania” to reference Phoenix, but I’m not that much of a douchebag. Instead, I’m just presenting to you the 100% scientifically accurate lists of the Top 101 Songs of the Decade, the Top 104.1 Songs of 2009 (in honor of the late WBCN), and the Top 10 Albums of 2009. Also, check out my 2009 in Review note on Facebook here.

If you don’t like it, sit and wait for Pax’s lists that are TBA.

Continues after the break…

END_OF_DOCUMENT_TOKEN_TO_BE_REPLACED

Tagged as 2009 in review, decade in review

“I had all the ambulance, and I had a pretty good time driving it”

Note to self: Never turn your back on Mindy Jones:

In the deep, sticky jungles of Cameroon lives a rare type of gorilla — one which has been hunted nearly to extinction by indigenous peoples and has never been placed on film.

Until recently, when a camera crew spotted the gorillas hanging out high off the ground in its natural habitat:

“These gorillas are extremely wary of humans and are very difficult to photograph or film,” said Roger Fotso, director of the Wildlife Conservation Society’s (WCS) Cameroon Program. “Eventually, we identified and staked out some of the gorillas’ favorite fig trees, which is where we finally achieved our goal.”

While the video footage of the great apes is comforting to those who thought they may already be extinct, scientists still worry for the future of these beasts. Not because of encroachment on their habitat, but because these gorillas appear to be knuckledraggers in more ways than one. Witness the video:

As you can see, this rare species is in mortal peril thanks to a lack of basic self-awareness and common sense. Some researchers predict the entire species will choke to death on potted meat sandwiches. Others predict they will be electrocuted by peeing on high voltage transformer stations. Either way, the world may soon lose the last of its rarest — and most retarded — primate groups.

Tagged as gorillas, haha philly fans are gorillas get it?, science

Via the always-excellent Warming Glow

The Necky is the perfect gift for morons

It’s a little-known fact, but cultural anthropologists routinely catalog social groups not by race, age, or geography, but based on a sliding scale of idiocy. Frantically searching for sunglasses that have been on your head the whole time actually places you in one of the upper echelons — while getting a tattoo of the Louis Vuitton logo on your bicep places you lower down the scale.

Near the very bottom of the list, nestled just under those with “These Colors Don’t Run” bumper stickers and those who drink water straight from the toilet, is a new category — those too dumb to operate a scarf.

Fortunately, one company is well on its way to improving the lives of these nincompoops. Say hello to the Necky:

Tagged as The Necky

My kingdom will soon be reunited!

For men of great power, the machinations of political fortune or misfortune are most often shrouded from the prying eyes of the public — a silent, unscrupulous waltz in the inky shadows of dimly lit parlor rooms.

So it was that Giorgio Carbone, erstwhile Prince of Seborga, died — and in doing so removed the last great obstacle in my quest to reunite the ancient thrones of Greater Paximiliano. Seborga — a tiny province nestled adjacent to the Italian riviera — is not the final step, but it has proven the most intractable, thanks to the admittedly awesome rule of Carbone:

After convincing his Seborgan neighbors of their true significance, Giorgio Carbone was elected prince in 1963. He gracefully accepted the informal title of His Tremendousness, and was elected prince for life in 1995 by a vote of 304 to 4. Voters then ratified Seborga’s independence, which, by the prince’s interpretation, it already had.

Prince Giorgio established a palace, wrote a Constitution, and set up a cabinet and a parliament. He chose a coat of arms, minted money (with his picture), issued stamps (with his picture) and license plates, selected a national anthem and mobilized a standing army, consisting of Lt. Antonello Lacala. He adopted a motto: Sub umbra sede (Sit in the shade).

While Carbone was my rival lo these many years, I plan to keep Lt. Lacala in his position. I cannot afford to lose the support of the military. I will also keep Carbone’s picture on the money and retain the national motto, because it would take forever to photoshop new Seborgan dollars and, let’s face it, sitting in the shade is awfully relaxing.

Last month we brought you the sad news that our brave Mars robot — Spirit — was stuck in some deep sand on the surface of Mars with little hope of escape. The poor guy is still trapped there, but was recently able to make even more history by taking this photograph of the twin moons of Phobos and Deimos orbiting the red planet: 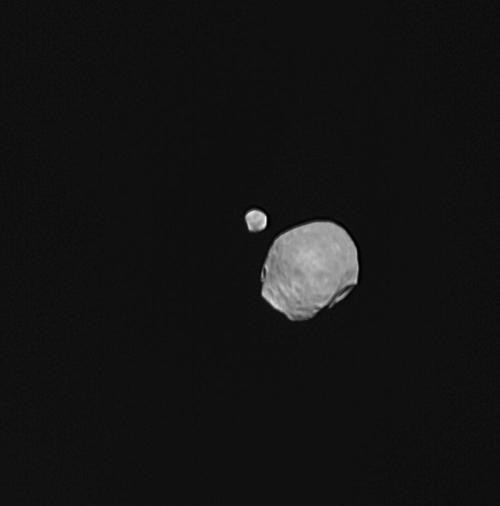 As you can see from these images — the first time these moons have ever been photographed from the surface of Mars — Phobos and Deimos are plainly not made of cheese. Rather they are giant floating skulls — the remnants of a once-proud civilization of 5,000 foot tall space aliens. Just kidding. They were faked in a sound stage in Burbank.

Out of the Blue — Julian Casablancas (Live at Le Grand Journal)

The Rules: The Friday Random 10 is exactly that — random. We open up our iTunes, set the thing on shuffle, and listen to 10 songs. We are not permitted to skip any out of embarrassment or fear of redundancy. Commenters are encouraged to post their own.

In Soviet Russia, gum blows YOU into bubble!

A 25-year-old chemistry student from the Ukraine (OK so technically not Russia, but still with the Bond villain accents) died recently after lacing his own chewing gum with an explosive compound. He was working in his room when his parents heard a “loud pop” and rushed in to find him disfigured and near death:

It was reported that the student used to dip chewing gum into citric acid. Police also found another substance near the body.

The news agency said investigators believe the student may have confused the two substances and began chewing on gum that had been treated with the unidentified substance.

If I’ve said it once, I’ve said it a thousand times — if you’re going to dip your chewing gum into chemicals before chewing it, you really have to be sure those chemicals aren’t going to blow your jaw clean off of your head. It’s like my advice just goes in one ear and out the other. Which reminds me — you should also refrain from putting explosive chemicals in your ears.

Tagged as chewing gum, explosions, news, those who prove Darwin

Tonight marks the finale of The Biggest Loser, also known as the Paradise Lost of television.

Rather than ramble on about who’s going to win (Rudy) or who I want to win (Rudy), I’d like to introduce a one-time interactive Pax Arcana feature.

Keeping track of tears tonight would be both wasteful and pointless. The count will be staggering, because there is a live audience of other fat people who have been “inspired” by these fat people. So I provide no over/under — it’s off the board.

Rather, here is what we track: How many times does the wonderful Ali get sidetracked by an exuberant cast member who doesn’t realize that live TV requires carefully timed segments? We’ve all seen Ali try to wrest control of the program from these blubbering fools, and the results are always embarrassingly fun. Poor Ali. I have a shoulder you can cry on, Miss Sweeney. Two, in fact.

So the line is an ambitious 6.5 tonight. I think Danny alone could ramble past his due time at least 4 times. Let’s see how smooth Ali can keep this.

Enjoy the show, people. And if all this inspirational weight loss is a little too positive for you, you can always check this out to see a fat guy who fell off the wagon. (ht: Spackler)

OK, “friend of Pax Arcana” is strong. I’m not sure Mitch Cote-Crosskill is even aware of us, even though we have linked to his ill-updated but amusing music blog Mitchfork in the past. Plus, Mitch has never met the actual Pax, just one of his yeomen (me).

Anyway, Mitch has published a novel called The Valedictorians, which he wrote in his first few years after graduating from our fine alma mater, the majestic Bates College.

The torch bearers of tomorrow are stumbling through the darkness. “The Valedictorians” is an unflinching look at a jaded generation desperately seeking direction. It tells the tale of Sam and Pete, two recently graduated best friends who exit college to enter the “real world” of 21st century America. A harsh adjustment ensues and, as they struggle to cope with crippling doubt and alienation, much about themselves and modern living is illuminated. The survival of each will hinge on how they adapt to the new challenges they face.

I haven’t read the final draft, but I did read his first draft and enjoyed the tale. Mitch is not a professional writer (this book is self-published through Mill City Press, for full disclosure), but he has a knack for writing an enjoyable story with relatable characters.

For those of you with connections to the northeast liberal arts college experience, you’ll recognize this story, particularly if you were friends with folks who truly blossomed in college and then struggled with the “real world” afterward. The emotions that the characters deal with — however, in the big scheme of things, trivial they might be — are real, and speak to the unrest that even the most educated folks feel.

The Valedictorians is available on Amazon (release date says January 1, 2010), or in person from the author himself, who is based in the Boston area. He’s even having a book signing party, which will consist of our college friends drinking slightly better beer than we drank in college, later this month.

I encourage you all to buy a copy. Hell, buy five. You’ve got Christmas presents to buy, after all. Grandma would love this book, especially the part where the main character nails his boss.

Tagged as Mitch Cote-Crosskill, The Valedictorians